THE AP QUEEN AND CHIHUAHUA 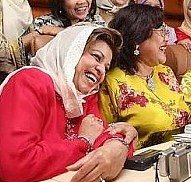 The AP Queen and Chihuahua
Locked horns to fight their game
In the Women Wing to lead
Over the fence the calling can be heard
They know they have no choice
It is a game they couldn’t back out now
Posted by lanaibeach at Friday, November 21, 2008